The concern related to affordability of healthcare medical concern is of considerable interest.

The majority of UAE residents would prefer their home country for medical consultations, according to a study done in the UAE recently.

Titled 'The State of UAE Healthcare Service Delivery: Public Perceptions' by Mohammed Bin Rashid School of Government (MBRSG) in January, the study also showed public concerns and perceptions regarding affordability and responsiveness in healthcare delivery in the UAE, which were lower - at 44 per cent and 36 per cent, respectively. The study included a cross section of 5,855 people. 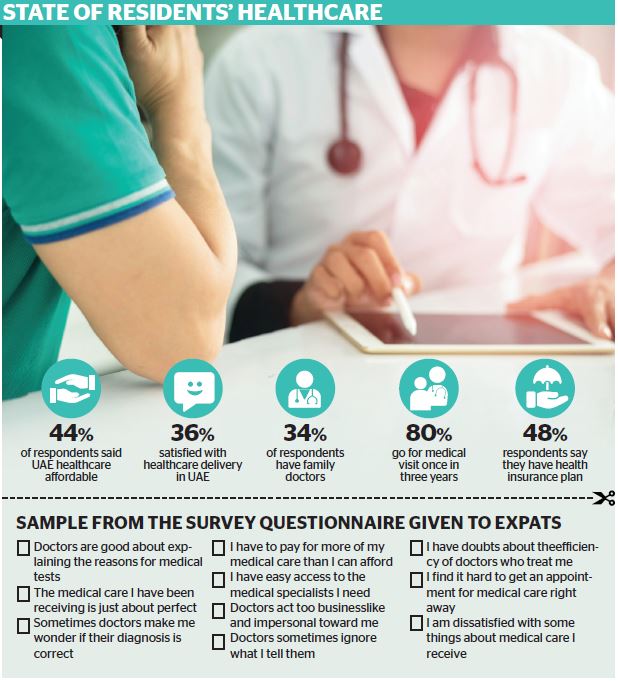 "This is indicative of the respondents' concerns regarding their ability to afford healthcare and doctors' willingness to spend adequate time on medical consultations," said Dr Immanuel Azaad Moonesar RD, assistant professor at MBRSG, who conducted the research study along with two other colleagues.

Results from the study showed that approximately 48 per cent of the respondents indicated having an individual or family insurance plan (individual: 26.8 per cent; family 21.1 per cent).

Only 34 per cent of the respondents indicated having a regular general practitioner or a family doctor, while 80 per cent participants indicated that they have had a medical visit at least once in three years.

Pointing out the key findings from the study, Dr Immanuel said that low concerns from respondents is indicative of respondents' concerns regarding their ability to afford healthcare and doctors willingness to spend adequate time for medical consultations.

"The concern related to affordability of healthcare medical concern is of considerable interest, as all the respondents indicated having some form of insurance plan," he said.

Statistically significant differences were observed between perceptions of the groups based on gender, age, nationality, employment status, the emirates of residence, number of household members, level of education, monthly household income, the type of insurance plan held, having a regular GP, recent medical visits, and preference for going back to home country for treatment/check-ups on almost all the healthcare provisions in the UAE.

However, respondents' perceptions regarding healthcare quality, and access and approachability in the UAE were the highest at 70 per cent and 73 per cent respectively.

Among the recommendations that came out of the study, the doctor said: "While it appears that the UAE has actually initiated a ranking scheme that assesses and rates healthcare facilities such as hospitals, clinics, labs and pharmacies; it is still striving to broaden the scope of this assessment beyond Dubai."

However, the Northern Emirates are not practising the same exercise, which is also needed.

"In terms of affordability, it was evident that affordability derived mixed results despite all participants indicating having some form of insurance plan coverage. This notion may require further investigations into the scope and magnitude of mandatory health insurance coverage that is being provided by employers to employees," he said.